In association with Champlain College and the City of Burlington, a project to bring to life Burlington, VT on the web via Google Earth. 3D Models with photo sourcing for textures, optimized to load quickly upon loading Google Earth.

Visualize Burlington 3D is one of the many projects within the walls of the Emergent Media Center (EMC) and is in association with the City of Burlington. The goal of the project with the EMC was to model the buildings on a block in Burlington into 3D. The block that this project was focusing on exists on South Willard, Main, South Union and Maple streets. 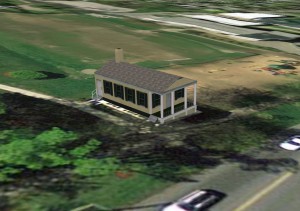 The program that was used for this project is Google SketchUp which is a 3D modeling program designed to be used with GoogleEarth to display 3D models on GoogleEarth’s snapshots of the Earth. The program is very architectural and makes it possible to model the building with very accurate depictions of its foundation. The program has a library available with many textures to use but the beauty of the program is that you can add custom made textures which made it possible for this project to make an even more accurate depiction of our buildings.

One of the issues facing the project was loading models on GoogleEarth. Many people in the world who would be viewing our archive of buildings on GoogleEarth would not be able to load our buildings if they were too large a file size. With that in mind a restriction was put forth to have the buildings be around 1 MB in file size and to have each foot of the building be represented by 10 pixels! To put out a comparison, many building models you see nowadays in video games work off a texture of a face being scaled to 1024×768 pixels whilst the same face would would come out on this building model as a scaling of 300×100 pixels. So in this project we were working with strict optimization guidelines. 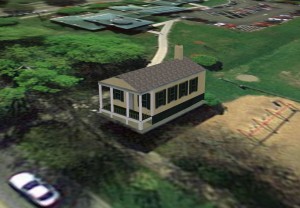 One of the ways this project is to be implemented with along with being a visual for GoogleEarth is to be used by the Zoning Department for the City of Burlington. This way the city can have building plans maked out and at the same time model the building and put it into GoogleEarth where they were thinking of putting it. So not only will there be footprints and landscaping plans, the city can also have a 3D aid to compare with rest of the city and the surrounding area. This way, they can tell right off the bat whether the spot is alright to build on or if that is not going to work in relation with the surrounding area.

Check it out on Google Earth! Go to Burlington, VT and turn on 3D layers on the side bar to the left.