You are the Overlord, these are your Zards. Defeat your opponent with massive aoe spells, the mighty Krakish and pure tactics in this turn based strategy.

Zard Overlord is a turn based strategy game made for the iPhone. We really wanted to create a fun top down game that integrated with the touch screen capabilities of many devices nowadays, especially the iPhone. For our production class, we launched the game in Flash for demonstration purposes.

You have 5 types of units to select, the Snooter: a ranged class, the Snark: an assassin class, the Magor: the spellcaster class, the Grok: your shield wall, base unit and the mighty Krakish: a tank class the takes quite a beating. Each class was designed with several types of abilities in mind and this influenced the way our Lead Artist, Joshua Terry, created the concept art and how this led to modeling decisions made by Josh and myself. 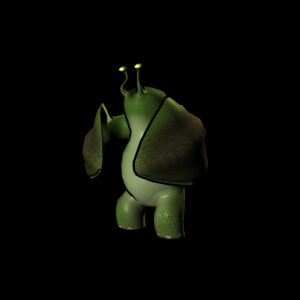 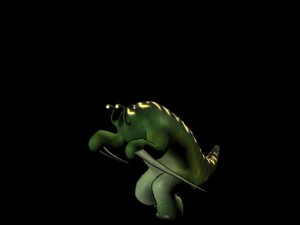 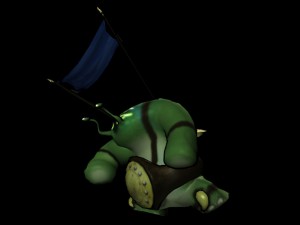 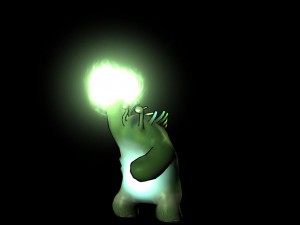 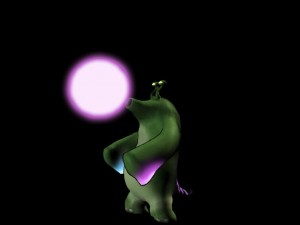 I was responsible for modeling of the Snooter, Snark and Magor based off the concept drawing from Josh Terry. Each mesh contained about 2200-2800 tris. These meshes were then rendered out of Maya using an 8 camera rig for each 3/4 view, into 2D sprites. These sprites were then organized into sprite sheets to be used in Flash.

I then took all the characters and rigged them up with a bipedal skeleton system consisting of about 30-38 bones depending on the character. The rig contains basic IK for the legs and a simple FK setup for the arms, eyes and tail.

Each character has between 5 to 7 animations including attack, run, special attacks and death animations.

I was also responsible for the spell effects in game, minus the spike wall mesh which was done by Josh Terry. They were created using the same render rig as the character sprites and utilizing Maya’s fire custom fire dynamics with some “tricksy” constraints to control the effect.

Below is a sample gameplay video demonstrating all of the mechanics and art. Video provided by Joshua Terry